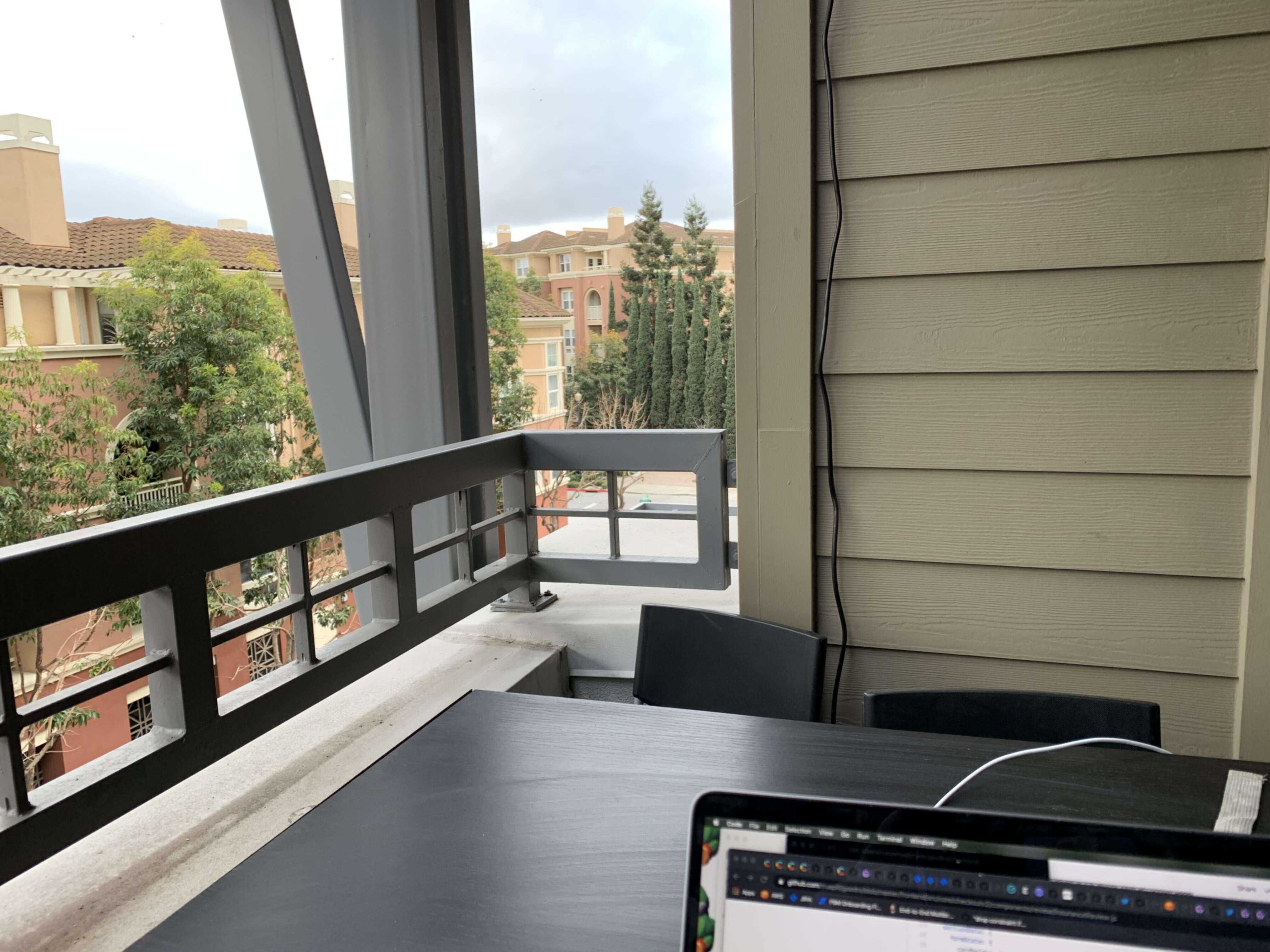 It's been a weird month. Two months ago if you'd ask me what I'd be doing in late March/early April, I'd have told you that I'd be in Japan for a trip that was in the making for the better part of a year. Times change though, and it became pretty obvious last month that traveling to a foreign country was not going to happen. We kept our hopes up that the situation would level out, that things would stabilize magically in time for us to not have to make any sacrifies and continue living life as usual, but here we are.

Considering the burnout I was starting to feel at work and the PTO that I had already cleared at work for late March/early April, I decided to take half of the vacation I allotted to stay at home and catch up on some personal things that had fallen by the wayside over the last few months. The goals were lofty; finish n books, go running every day, start and finish (like that ever happens) a new and interesting software project. It's always easy to set the bar high when you have multiple days ahead of you (five days is so long, the possibilities are endless!) and feel a little melancholy at the end when you obviously fail to meet every single goal. Looking back though, it was a chill and busy week at the same time. 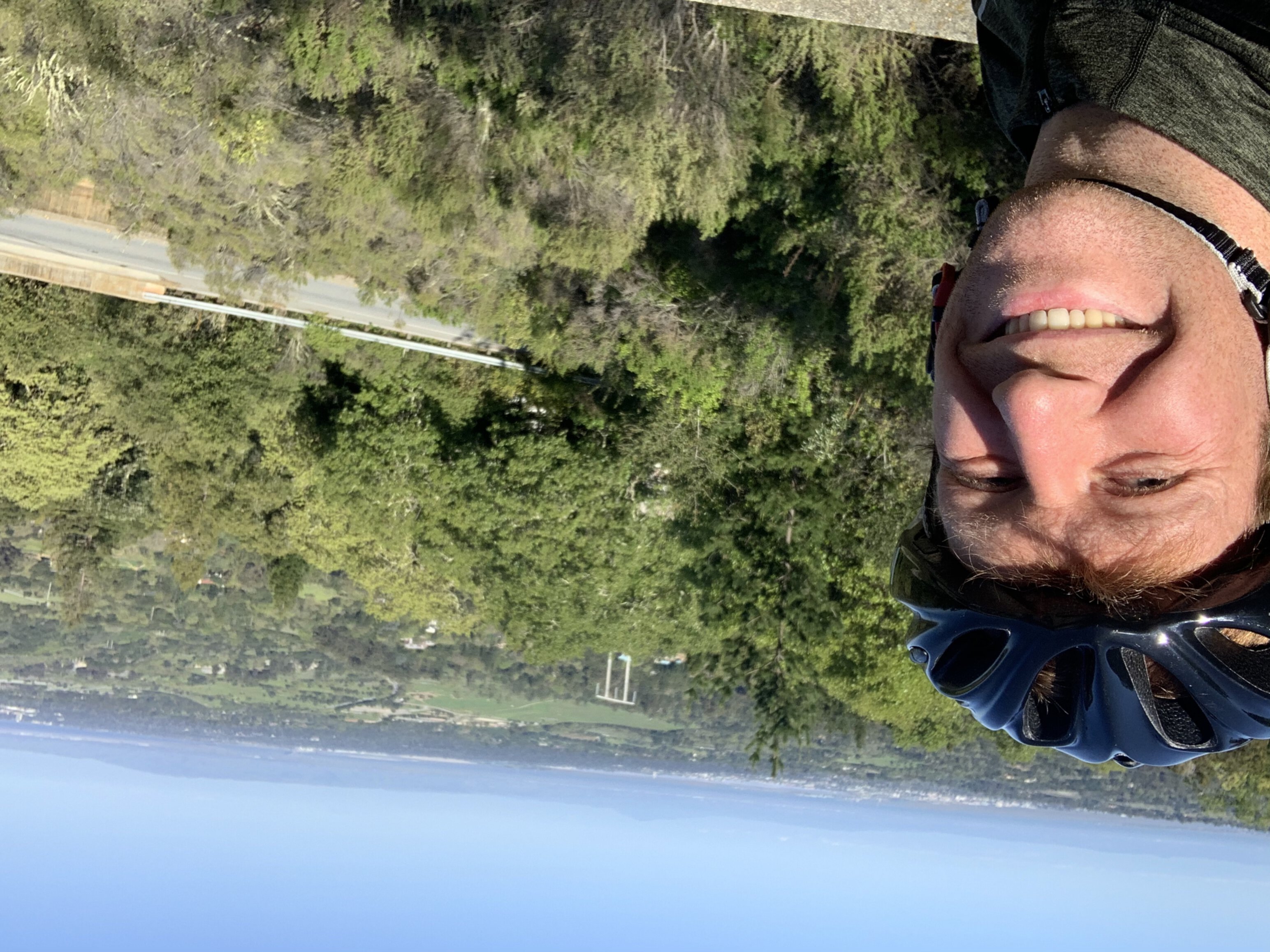 I biked around 50 miles over the week around places like Redwood City and Woodside. The crowning achievement was on Wednesday when I did a 22-mile round-trip from my apartment in downtown Redwood City to Skyline Blvd in Woodside, at the top of one of the ridges between 280 and the coast. I really want to do a ride from 101 to the coast (maybe San Gregorio or something?), and that ride is the farthest I've gone so far. It's not quite halfway to the coast, but it's progress! That was the first ride I tried out my new clipless shoes and I'll have you know I only fell over two times. It was probably more embarrassing than painful, considering both times I was at a busy four-way intersection where drivers in each direction got to witness the majesty of me slowly realizing my feet wouldn't unclip and I helplessly toppled onto the asphault (while still shackled to my bike). In addition to that shining achievement, I went on a couple social distance bike rides up some mean hills in Redwood City by 280.

Books! I haven't really had time to just sink half or an entire day into a book, but I made sure to do that almost every day in the last week. I started Farenheight 451 for the third or fourth time and made sure to finally finish it this time. It was a particularly relevant book to read when I was feeling like I hadn't devoted time to a good book in a while. I also enjoyed that it pivoted from the expected "books are great" narrative into a more general narrative about discource and discussion between people. I tried to balance out between fiction and non-fiction, so I finished It Doesn't Have To Be Crazy at Work by the Basecamp founders. As far as I wasn't reading it for work purposes, I definitely have a few takeaways I can keep in mind for when I go back to work. It was really refreshing to read after working in a start-up environment for the past few months. Most of the takeaways can just be reduced to "things don't have to be crazy", so nice job on the book title.

In a weird fiction/work-appropriate mix of a book, I finally finished The Phoenix Project, which describes the story of a middle-manager promoted to VP of IT in a dying company and bringing modern work practices like agile and continuous delivery to save what seems like a completely sunken ship.

I won't have time to finish it before I go back to work (unless I stay up all night), but I started How Emotions Are Made, by Lisa Feldman Barrett. I'll have to write a little more once I make more progress on that. 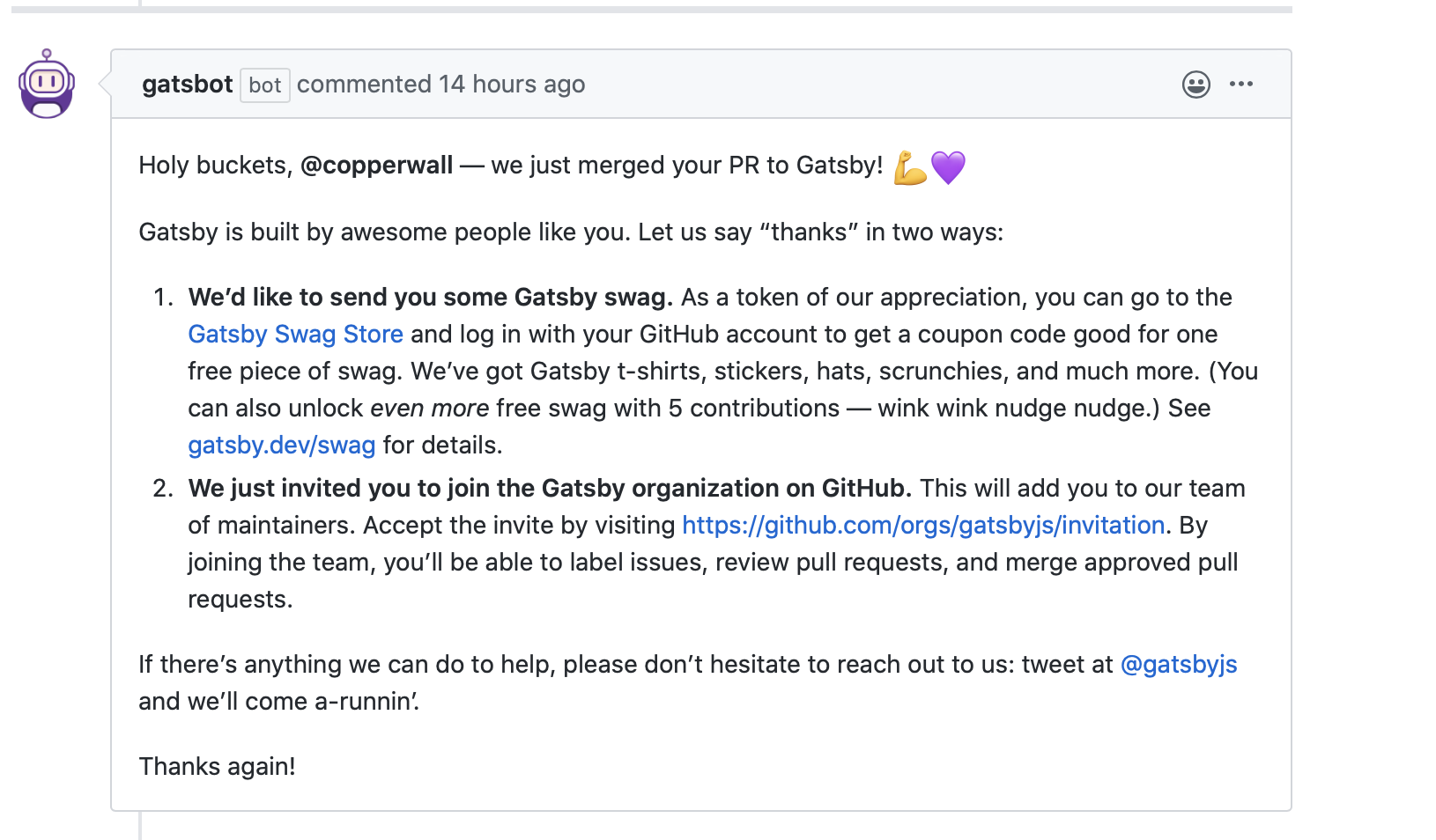 I love love love contributing to open source projects. Part of me was a little worried that doing work-adjacent things like open source contributions would hurt the burnout feeling more than help, and part of me thinks that I probably should've taken it a little easier than I did, but to be honest it makes me happy, so I did it anyways :P.

I made two pull requests on gatsbyjs/gatsby, one for a build issue in gatsby-source-graphql and a doc improvment for their documentation site. I accidentally spent some of my Friday trying to fix the gatsby-source-graphql after trying to use it on my personal site and realizing that it wasn't quite working. At the end of the day, they opted to take an alternative approach to fixing it than my PR did, but everyone was super friendly and I got to learn a little more about how that particular plugin works. My documentation PR did get merged though, and they gave me a voucher for some free Gatsby socks, so I'll chalk that up as a win. I'm definitely going to be more active in that community. I made a PR today using the information I learned from my gatsby-source-graphql PR experience to make a PR on the gatsby-starter-github-api starter example. Maybe they'll merge it, maybe they won't, but I feel pretty happy about it.

In another vein, I got a PR approved for a hacklang mocking library called hammock that Quizlet maintains, and I made some error-handling features to an Octokit repo that helps out when generating tokens for a GitHub OAuth application. I got a small front-end change in today as well for the documentation site for octokit/rest.js. The maintainer for that org is awesome and makes contributing a pleasure (shout-out to @gr2m).

Also I've been working through this cool blog post about writing a bittorrent client in Go (a language that I have no experience in). I've also been working my way through tour.golang.org to feel a little more comfortable with the language. After spending most of my time in JavaScript for that last two years it's pretty refreshing to try out different ones like hack and go.

Yeah it's kind of a bummer that I didn't get to have the vacation that I was planning on having. Sometimes you've just got to roll with it though. I'd also just like to put out there that in times like these that I feel extremly grateful to have a job that I can continue to do from home and to have a job that I can take a week off of and go back to afterwards.

I'd also like to thank my friends for almost always being available for shenanigans on discord even if I fall off the face of the earth sometimes to do stuff like I was mentioning above.

Also it wouldn't be a quarantine vacation without some homemade sourdough and Animal Crossing. 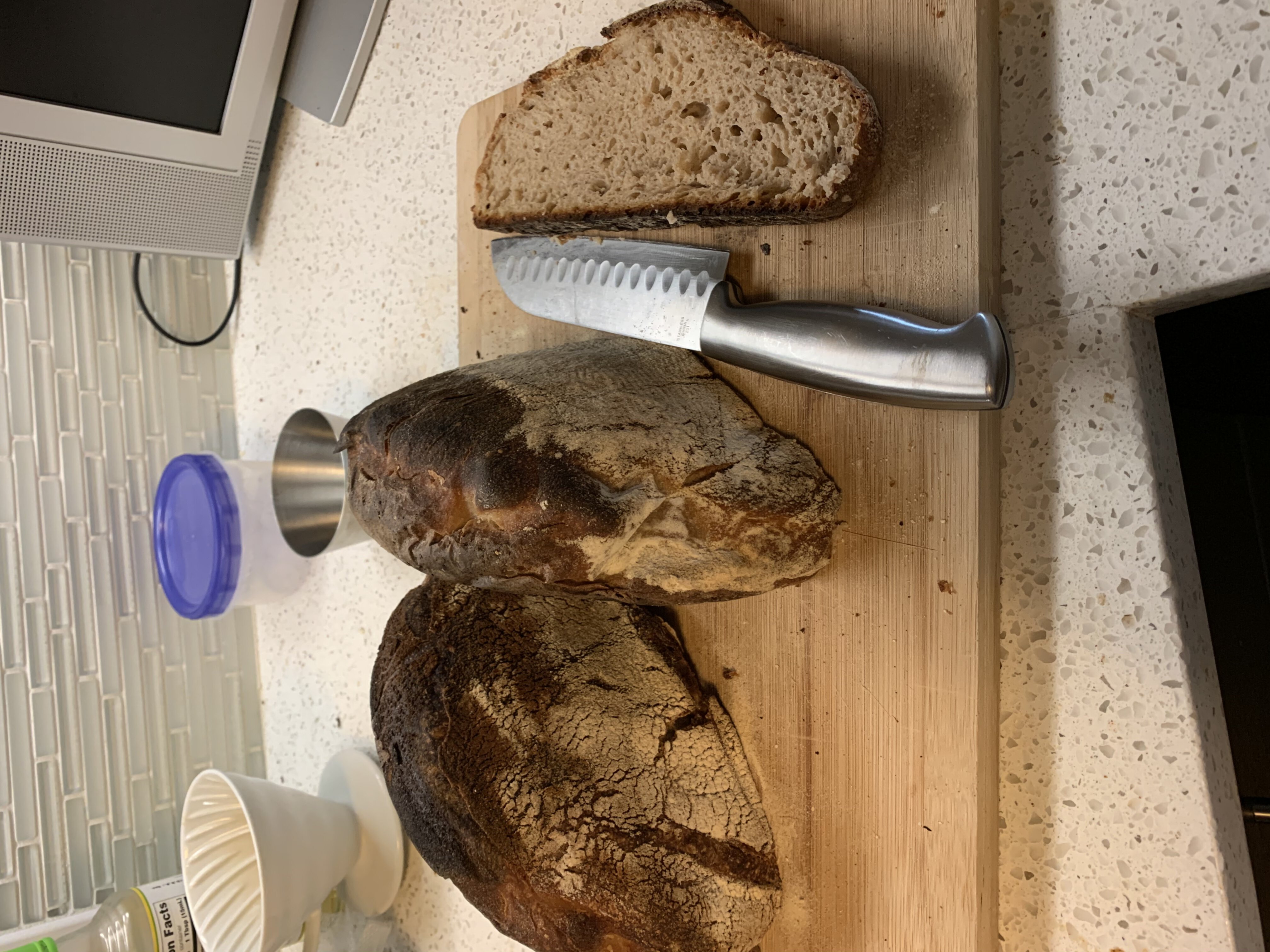 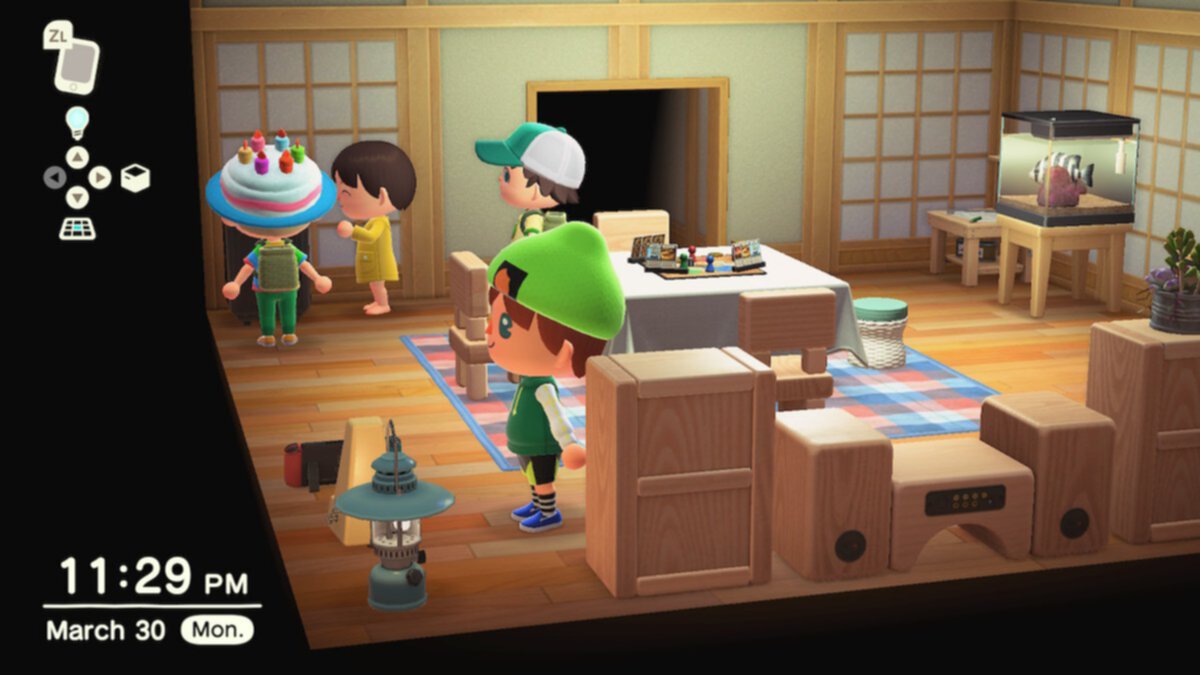