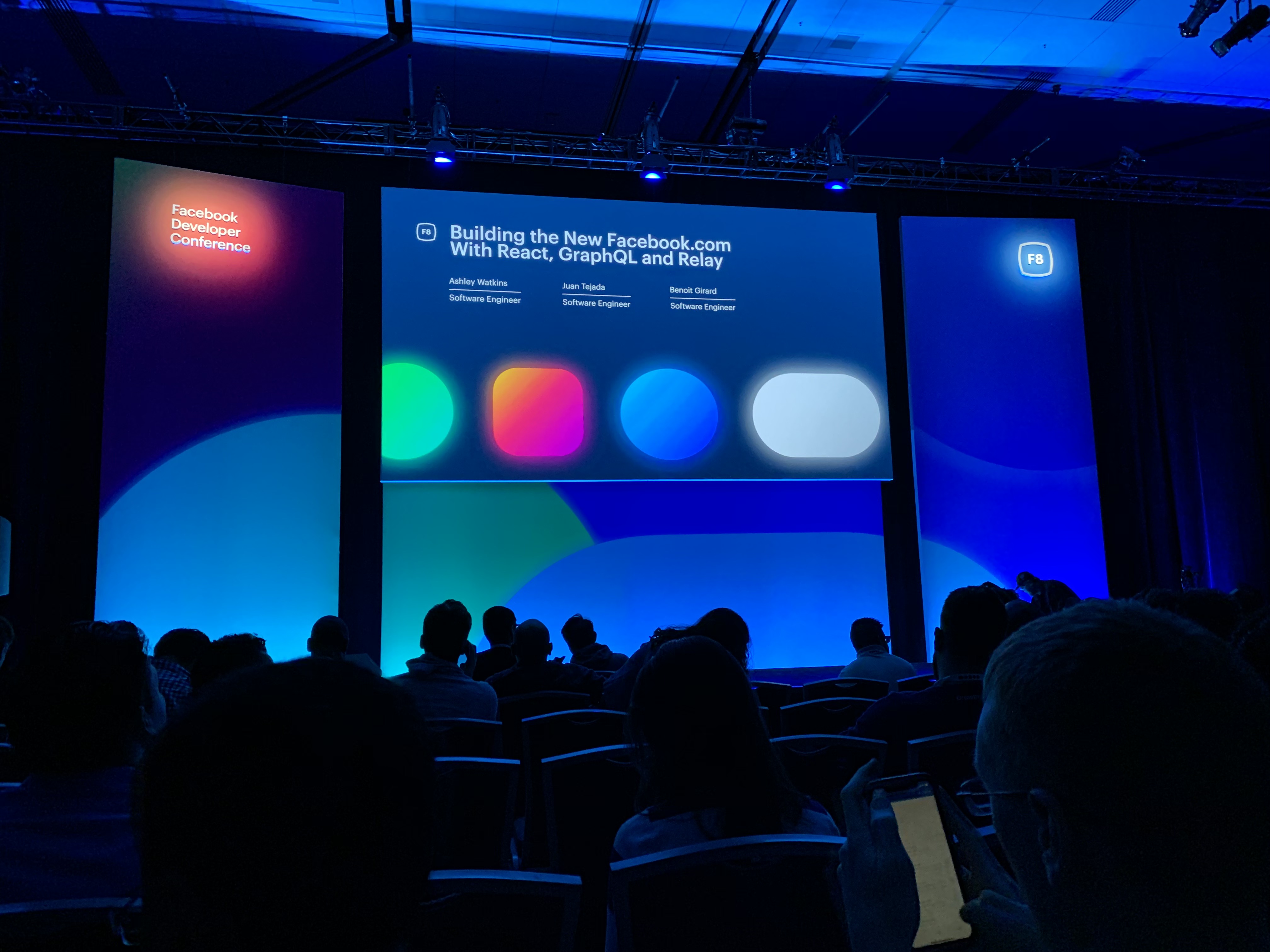 I (semi-)recently went to Facebook's Developer Conference, F8, in San Jose, CA. It was the first conference I've gone to since I went to GitHub Universe 2017 on behalf of iFixit, and the first time I've gone to a conference on behalf of PayPal. Or at least I guess I sort of went on behalf of PayPal. I asked my manager if I could go because some of the talks on React and GraphQL sounded pretty cool. React is definitely the present and future of front-end development at PayPal (and the general web?) and we have a pretty strong group of people at the company advocating for going in on GraphQL. So I thought learning more about those at the conference would be fun for me, and beneficial for my job.

Anyways, I totally meant to write a recap of this after I went, but life happens, and work things go crazy sometimes. I'm camped out in a hip coffee/donut shop in beautiful San Luis Obispo, so I thought I'd start a pomodoro timer and see what I can bust out in that time.

Going to a conference alone

So this was the first time I've gone to a conference without friends or coworkers. I didn't know of anyone else who was going, so I was completely on my own. In one sense this was great; I could go to whatever talks or sessions I pleased without having to worry about what the rest of a group was going to do. On the other hand, it was pretty odd going to lunch or happy hour and not knowing a soul. It looked like people had already either arrived in groups or had somehow found people that they jived with, but I found it kind of intimidating. So I didn't really go to too many of the happy hours or social events after the conference. I also live like 15 blocks from the convention center, so it was kind of easy to just walk home if I didn't feel like being there.

Next time I go to a conference alone I definitely need to try and reach out to people a little more. I'm not really sure how to do that, but I've started going to meetups in the city more often, so I'm trying to put myself in situations where I don't know people and have to find something in common or something interesting to talk about. This is especially true if I end up actually travelling for a conference. If I go to some event in San Jose or even San Francisco it's pretty easy to just go home afterwards. But if I end up going to some React or GraphQL conference out of state or out of the bay area (which I totally want to do after going to F8) it'd really be worth my while to meet other developers who travelled to go to that event as well.

The keynote was fine. It sounds like they're working on a bunch of cool things. They mentioned privacy in basically every other sentence. Based on their history who knows if that's genuine. I don't really use Facebook that much so I wasn't really that taken by the keynote. It was kind of interesting seeing Mark Zuckerberg on stage in the flesh. 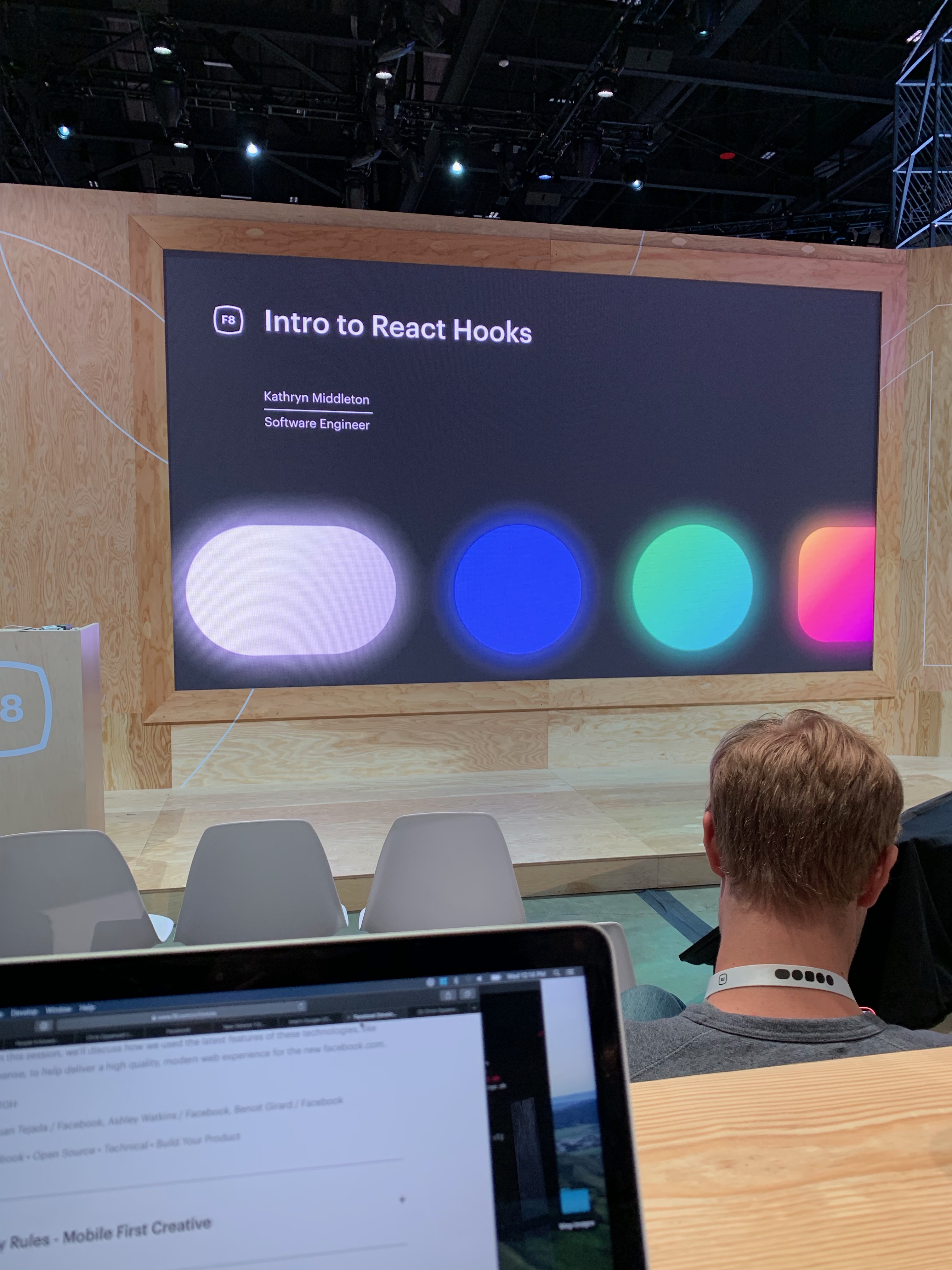 They had a pretty cool workshop area set up where you could sit at long tables with your laptop and follow along people giving demos of Facebook tools like PyTorch, Docusaurus, React Hooks, GraphQL, etc. The Docusaurus and React Hooks workshops were really nice to attend. I had no idea that Docusaurus was used by so many different places like Jest or even Smash.gg. The React Hooks intro workshop went over some hooks basics and how to go about making custom hooks, which I had never tried before.

A big portion of the conference area was set aside for the Facebook Open Source tools, where you could just walk up to someone who works on React or someone who works on WebXR and just ask them questions or talk to them. They also had slightly more structured times to meet with teams specifically. I went to multiple events where members from the React core team would just stand in a circle with everyone who attended and make jokes and took questions from people. To my surprise I had the courage to ask them some hooks questions and React Native Web questions in front of everyone and they were really candid and thorough about answering them.

I can't really express how nice they were. I had a few minute conversation with some of the team members on the first day, and when I came back to the open source area on the second day they remembered me and let me ask even more questions! I got to ask a core team member about data loading with suspense and they talked about some issues they were currently having internally and some things I could try out if I wanted to use some not quite stable APIs. I honestly left more questions than when I started, but it so great getting to pick the brains of people who work on a tool that I use basically every day. They were so friendly and happy to help as well.

This was obviously the highlight if you couldn't tell by how stoked I am about how it went.

Would I go back?

I'm not really sure if I'd go back to F8 next year. The react meetup was an outstanding experience, but I wonder if it'd just be better to go to React-specific conferences like React Conf or React Rally or any of the other myriad of React conferences.

The talks that were given at the conferences were really informative, but I could have probably gotten the same benefit by watching them on YouTube.

If I went back I'd definitely want to bring a coworker or friend to feel a little more socially comfortable about talking to other people. Or I should probably just make it a priority to meet new people and see what they're working on at their respective companies and network a little.