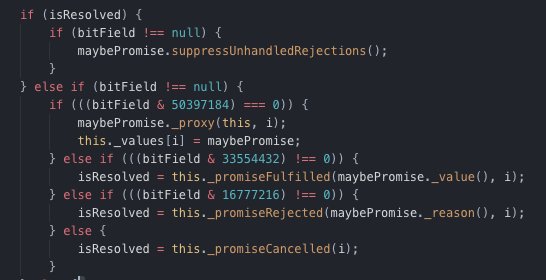 Promise.all is a static method on the Promise object that takes a list of items and returns a promise that resolves with a list containing the values of all resolved values in the input list. If any of the values are rejected promises, the returned promise will also be rejected with the rejection message of the promise that is rejected first. This is particularly helpful for when you want to run multiple promises concurrently, but wait until all of them have been fulfilled before continuing.

If you're using promises directly in your code you may write something like this to make multiple concurrent requests to different API endpoints, and wait until all have completed to operate on the responses.

You can also use Promise.all in async functions if you want multiple async function calls to operate concurrently instead of running them sequentially. In the following code snippet two network requests are made, but the second isn't initiated until the first one completes. This means that if the first request takes five seconds and the second request takes five seconds, the section after the requests have completed will have to wait for the sum of the request times to run.

In this example both network requests are initiated at the same time. If both requests take five seconds, the section after the requests have completed will have to wait for the maxiumum of the request times to run.

It's important to remember that if any of the values in the list passed to Promise.all settle to rejected promises, the entire result will be a rejected Promise.

I thought it'd be neat to go over some possible implementations for Promise.all.

Promise.all can be implemented using a recursive solution. The base case is when Promise.all is called with an empty array, in which case it returns a promise that resolves to an empty array. Otherwise it take the resolved value of the first item in the list and calls Promise.all on the rest of the elements in the list.

For the iterative solution, you'll want to return a new promise that only resolves once each of the values of the array provided has resolved, and rejects if any of the promises reject.

The executor function given to your function can keep track of the results as each promise resolves and keep track of the number of promises that have resolved. You can use a for loop or a forEach to iterate over the list of values and call the then method on each of them, adding the result to the results list as they resolve. It's important to remember that Promise.all maintains the order of the results from the promises provided as input, so you can't just append to the results list whenever a promise resolves. You'll need to know the index of the promise that is resolving in order to know where to place it in the results list. In the example I'm doing this by taking the index argument to the forEach callback.

We don't need to explicitly handle catching promise rejecting because the promise we return will be implicitly rejected.

Bluebird is a pretty common Promise library to use outside of the Promise implementation provided by most JS environments. Their design principles include taking the pragmatic or performance-oriented approach over elegant solutions, so it should be interesting to see how they implement Promise.all.

The PromiseArray constructor takes a values parameter, which can either be an Iterator of any value (this includes both promises and concrete values), or a Promise that resolves to an Iterator. The constructor sets up the following instance fields

After initializing these fields, the constructor calls the _init method.

The _init method does some setup and error checking on the values input. It checks if values is a promise and sets up the promise to call _init when the promise resolves. It will also check if the promise is already rejected or fulfilled, so that it can either immediately reject the return promise or immediately set the _values field to the fulfilled value of the input promise.

If the values argument is a list with more than zero elements, the list is passed to the _iterate method.

The _iterate method does a lot of the heavy lifting for PromiseArray. Each item in the values argument is passed to tryConvertToPromise. If the result is a promise, a local bitField variable is set to the bitField of the promise, otherwise the bitField is set to null. The bitField is later used to determine the resolution status of the promise (i.e. whether it's pending, fulfilled, or rejected).

Hopefully that was kind of interesting. The solution implemented by Bluebird obviously isn't as "elegant" or "simple" as some of the recursive or reducer solutions we introduced earlier, but I thought it was interesting to see some of the optimizations they chose to take. The idea of proxying promise resolutions of each of the individual promises back to the returned promise seemed like a pretty simple way of handling a list of promise resolutions. I suppose you'd have to build in the idea of a receiver promise into your promise implementation, so I'd be interested if Bluebird has other uses for that functionality outside of Promise.all.